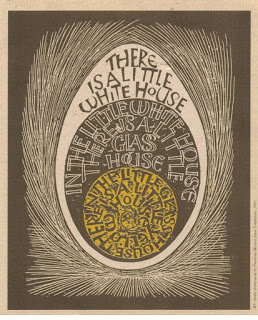 The egg: a humble thing, really. The staple of breakfasts, the provider of good snacks, the necessary ingredient in so many recipes. The egg is as important and taken for granted as the sky above us and the earth below us. And yet, so interesting.

There are some things about eggs most of learn experience. For instance, a good egg will sink in water, but a bad egg will float. A well-done boiled egg will dry quickly when taken from the water; fresh egg, when boiled, will be a mess to peel; old eggs are glassy and smooth of shell, and might not be a good idea to use.Did you know that at one time farmers scattered eggshells on their fields, believing that eggs represent fertility and would bring them a good harvest?Then there is this English rhyme:Break an egg, break a leg;Break two, your love is true;Break three, woe to thee.

In Ireland, people left empty eggshells outside to provide shelter for the fairies. However, others believed that witches made boats out of eggshells and used them to travel from place to place, Witches must have been quite small!
A double-yolker, as we call the eggs with two yolks, were believed to bring good luck. In reality these eggs usually indicate a young hen just beginning to lay, or an older hen getting ready to stop laying.
An egg left on your doorstep can be very bad news, or very good, depending on what culture you are from. In Brujeria (Spanish/Latin witchcraft) it's very bad--means someone has put an evil spell on you. To break the spell you must urinate on the egg and then sweep it into the trash without touching it (who would want to?). But the egg would also indicate someone wishing you good luck and/or fertility. I'll take that meaning, thank you.
Sometimes--again, usually when beginning to lay or ending a hen's fertility--a hen will lay a very small egg. I mean like robin's egg size of smaller. In Appalachian lore, these eggs should be thrown onto the roof of your house to placate the witches. We've always just mixed them into scrambled eggs. I wonder if that was a good idea.
There are many, many other egg superstitions. Here are links to a few:
Learn Religions website
Bon Appetit magazine's website
Food & cooking superstitions
Egg dreams

The Russian Ballerina of Coal Grove

Why is a Russian ballerina buried in remote Coal Grove, Ohio? I went in search of answers, and here is what I learned:

Antoinette Sherpetoksy was born in Lithuania May 7,1894, in the days of Imperial Russia. From an early age she trained as a ballerina until as a teenager she was performing with the Imperial Russian Ballet, in front of royalty. It has been said that Czar Nicholas II was so taken with her that he gifted her with valuable jewelry.

Her family left Russia, possibly due to the turbulence of the political situation and the poverty that had much of the Russian population in its grip in the early 1900's, and moved to Chicago sometime before 1910.

Antoinette continued to perform in her new home. She became a member of a Chicago ballet company, and was given the nickname "Teeny" because of her small stature. She was considered, however, to be a perfect physical specimen and was featured on the cover of a magazine of the time as a prime example of the human form.

Teeny met her husband James Peters in Chicago. A native of Ironton, Ohio, he was an industrialist, an inventor who worked within the steel industry; he was also a writer, according to his obituary, although I do not know what kind of writing he did. This was the heyday of the steel industry in both Ohio and Chicago, and the Peters became quite well-to-do and well-known, he in industrial and business circles and Teeny in the art world. She toured extensively for many years.

Teeny opened a school for dance In Chicago. After James retired and the couple moved to his hometown of Coal Grove (originally named Petersburg for his father who was and early industrialist in the area and laid out the town), she continued to operate her school in Chicago and taught dance in Florida as well when the couple moved to Del Ray Beach in the Sunshine State. The Peters kept a home in Chicago, however, and often visited the Chicago area. I can imagine that Teeny longed for the artistic world of the city in which she had lived for so many years.

It was the day before her birthday, May 6, 1962, that tragedy struck. While in the Chicago area to visit family, the Peters' car was struck by a car driven by a young man whose vehicle swerved across the median and struck them. Teeny was killed instantly, as was the young man and his companion. 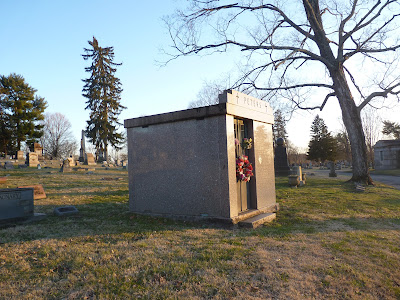 James had his beloved wife's body brought to Coal Grove, Ohio to be interred in a glass-topped casket in a mausoleum in his family's plot in the historic Woodland Cemetery. The jewels given her by the Tzar were buried with her. Eleven years later James would be buried in the mausoleum by her side. 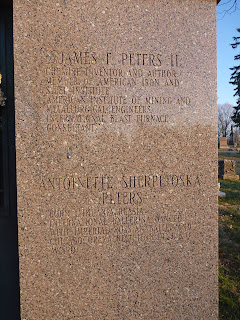 But Teeny was not to enjoy eternal rest. The mausoleum was vandalized, her coffin opened and the jewels stolen. The Peters' coffins were moved to a new mausoleum and enameled portraits of the couple were placed on the outside. Sadly, vandals targeted those too, and the portraits were eventually destroyed and removed. You can still see the outline of the ovals on the outside of the mausoleum. 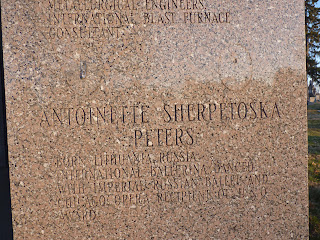 The cemetery is beautiful, filled with mature trees and wandering lanes. 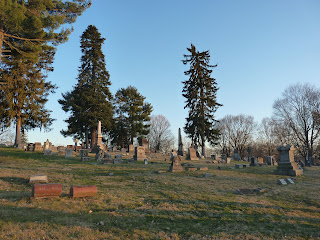 One section is reserved for veterans of the Civil War. 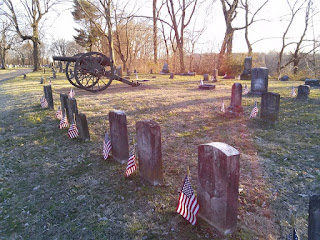 The Peters mausoleum stands quietly beneath the trees, in Section 7 of the cemetery. 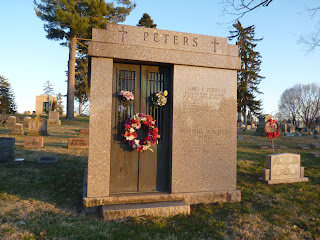 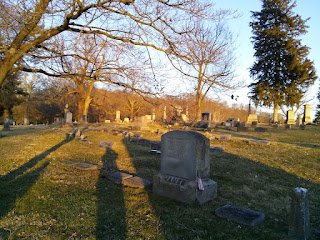 There were flowers on the door, testimony that Teeny has not been forgotten. A stained glass window graces the back wall. 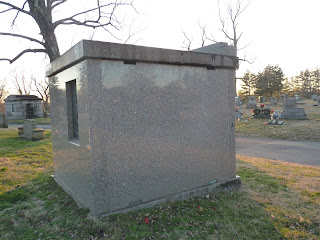 Peeking through the barred front entrance to see the stained glass. 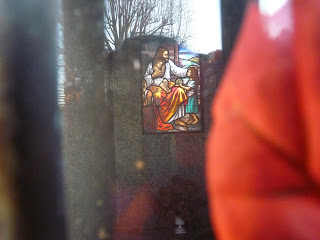 Local legend has it that the ballerina is still dancing. She has been seen twirling among the gravestones at night to some ghostly music that only she can hear. 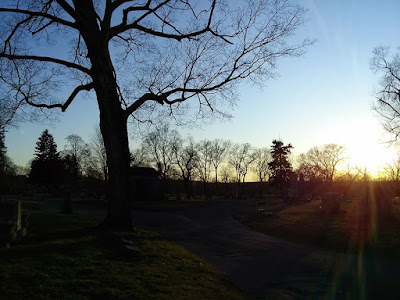 All I can say is, dance on, Teeny.

Thee local historical society sometimes offers a ghost walk through the cemetery, and I believe it would be well worth attending.

If you want to visit Teeny, here is the easiest way to find Woodland Cemetery:

From Huntington, WV take Route 52 West to the Coal Grove exit (Route 243). At the end of the exit ramp, turn left. Go about 1/2 mile or maybe less, past a Wendy's and a Speedway. You will come to a 3-way stop. Turn right--you'll be on old 52 West. Go about 1-2 miles and turn right onto Lorain Street. Stay on Lorain for a pretty good way--at least a mile, I think. You'll pass some industrial/business sites and go over the 4-lane highway. The cemetery is on the right. (It closes at dusk, so please do not trespass!)

Theresa's Haunted History of the Tristate
Posted by Granny Sue


I will be on the storytelling stage Saturday and Sunday. Come enjoy this fine festival and help celebbrate its 50th anniversary. 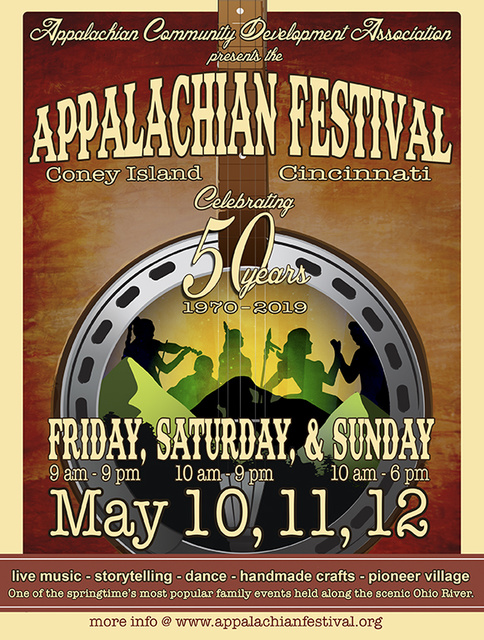 Coming June 23-28 in beautiful Marlinton, WV--writing and storytelling in the mountains.
I am looking forward to being the Creative Writing workshop leader this year for Allegheny Echoes. Thanks, Echoes, for inviting me! I have some exciting plans for this year that bring something a little different to the class: storytelling. We'll still be writing poetry because hey, I love it too. But we'll also be working on and telling stories. I have some field trips planned, and I know our Master for this year, Kari Gunter-Seymour (Poet Laureate of Athens County, Ohio, and Founder/Director of WomenSpeak), is going to knock us out with her inspired workshop and performance.

Coming This Week in Vienna, WV: Celtic Stories and Songs 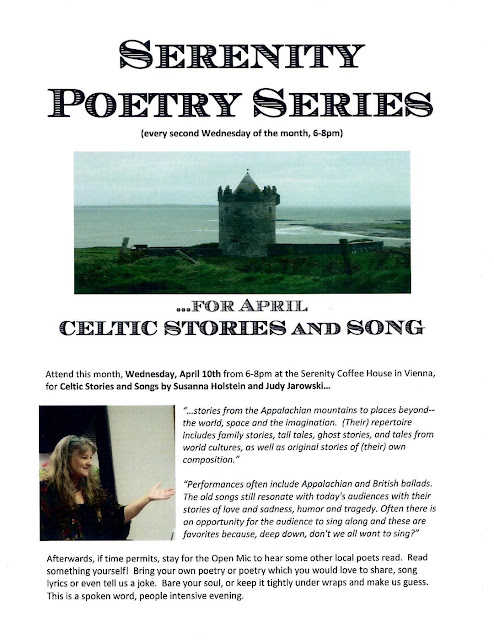 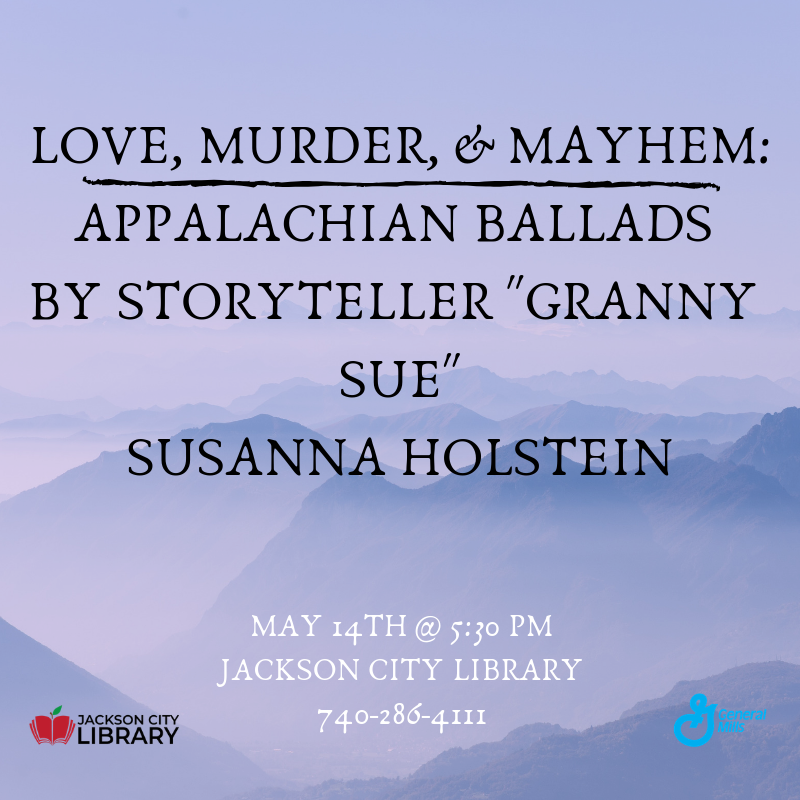 Can't wait to do this presentation for the Jackson City (OH) Library!
Posted by Granny Sue

Mountain Story, Mountain Song: A CD of stories and ballads from the mountains $14.95

Beyond the Grave: Ghost Stories and Ballads from the Mountains- $14.95

Need a storyteller for your event? Copy and paste this form into an email message, fill in your information and send to susannaholstein@yahoo.com. I'll respond quickly!

Are you planning a party or other event and looking for something different to offer your guests? A storytelling house concert might be just what you want. Warm, interactive, entertaining and engaging, storytelling has been the entertainment of choice for centuries. Treat your guests to this ancient art! Email or call me for more information. susannaholstein@yahoo.com or 1-304-372-5861.

Granny Sue:
Stories from the Mountains and Beyond
304-372-5861
susannaholstein@yahoo.com

What Others Say About Granny Sue

“Granny Sue’s programs were geared to their level so well that the children are still talking about the stories and telling them to friends and family.” Julie, librarian

“Your performance received high praise from the audience and other tellers alike.

“The interaction with the children made this program special.” Pamela, Children’s Librarian

“Granny Sue has been described as one of the few tellers that is equally effective with any age audience and her variety of material helps her present the right story for the right audience.” Bob, Storytelling Festival Director

“The program was right on target. The presenter demonstrated how stories could be presented to encourage student involvement and present difficult themes in an accessible way. The program was just what we hoped for: relevant, informative, and entertaining.” Bill, conference director

“We liked the fact that you started to interact with the children before the program started which seems to set the mood and tone for the entire program.” Mary, librarian

“Granny Sue was wonderful! I laughed until I had tears in my eyes.” Amy, teacher

“My students sat spellbound listening to Granny Sue. She really connected to them. They did not want her to leave.” Cheryl, teacher

“The hit of the day was Susanna Holstein’s “Storytelling Without Stage Fright. One attendee made the comment that she enjoyed the program because she could participate instead of sitting and listening.” Library Association newsletter

“The way you connected with a group of teens with very different backgrounds and frame of reference was excellent.” Mark, Sales Director.

“Mrs. Holstein, thank you for telling ghost stories. I liked that better than anything!” Jamie, student

“You put into action a wonderful, quality program for our haunted house. Presentation was excellent!” Veronica, Bed and Breakfast operator

“Your commitment to fascinate and entertain our visitors with the tales and truths of Appalachia is unprecedented.” WVU Mountaineer Week

“Your wonderful storytelling and sparkling personality went a long way in making our celebration a success.” Nancy, festival organizer

“We were really excited to have an opportunity to expand the educational activities and it was with your help that it turned out so well.” Rosalie, festival director

“Granny Sue has the most hauntingly beautiful voice that went just right with her powerful story… She had the crowd in the palm of her hand. Just beautiful!” Karen, storyteller

"Granny Sue starts her tale by belting out the strains of a love song like a young Loretta Lynn… you must get her to tell you the tale of Rain and Snow, it's potent with emotion. Mel, storyteller